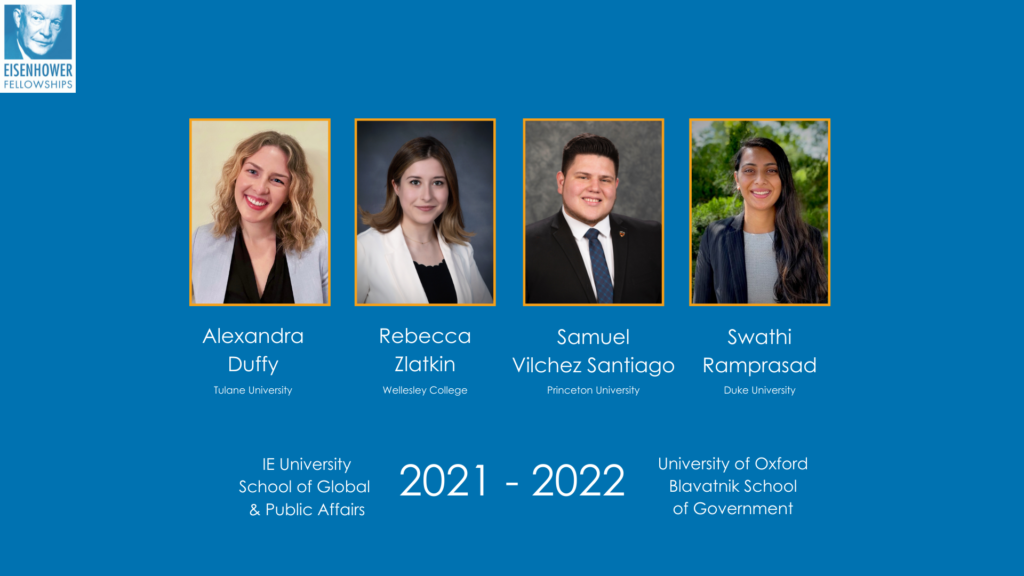 The unique program, inaugurated in 2020, harnesses the power and prestige of EF’s diverse global network of midcareer professionals to inspire, empower and connect a younger generation of American leaders, sending them to Europe for a year of postgraduate studies leading to a master’s degree.

This fall four highly accomplished recent graduates of American universities will begin an all-expenses-paid year of intense academic study and cultural immersion at the University of Oxford in the United Kingdom and at IE University in Madrid.

Ramprasad, 21, founder of Duke’s Cyber Policy and Gender Violence Initiative, is its principal researcher. Her honors thesis on the demographic biases of bail-setting algorithms was awarded “highest distinction” by Duke’s Sanford School of Public Policy. She headed a program through Duke’s Kenan Institute for Ethics that connected 40 recently resettled refugee women with undergraduate mentors. She wants to use the knowledge she acquires at Oxford to create a multilingual website for the refugee population of Durham, North Carolina.

Santiago, 24, was born in Venezuela. He was 13 when the United States granted his family asylum as political refugees fleeing persecution by the regime of former Venezuelan President Hugo Chavez, whom his parents opposed. He co-founded the Familias Presentes Movement, a non-profit that advocates for better educational opportunities for Latino students across Florida.  As the youngest member ever appointed to the Orange County (Fla.) Charter Review Commission, he championed proposals to expand access to clean water, protect conservation lands and strengthen environmental regulations. He wants to use his studies at Oxford to develop an interdisciplinary approach to policy advocacy, and “continue growing as a public servant.”

Duffy, 22, has her sights set on a career promoting financial literacy and reforming global lending practices. As a budget policy intern for the New Orleans City Council, she identified misreported funding, resulting in budget reallocations to support alternative approaches to public safety. She is passionate about personal finance, budgeting, saving and the sensible use of credit. She wants to increase access to financial education, especially for women utilizing microfinance, through the creation of an online global platform to feature video financial-literacy tutorials and curated digital information.

Zlatkin, 24, served four years on the board of Wellesley’s Hillel affiliate, ensuring that the interests and needs of Jewish students were heard by the greater student body. As philanthropy chair of her college’s Historical Society, she organized volunteer events at area non-profits, including a nearby homeless shelter. Through the Connecticut Association for Human Services, she provided free tax-preparation services for low-income residents. She wants to use her IE studies to prepare for a career in public service with a focus on trade between the United States and the Spanish-speaking world.

In addition to their year of study, the Global Scholars will interact with Eisenhower Fellowships’ worldwide network of leaders from government, business, civil society, education, science, health care, the arts and journalism. At the end of their studies, they will be offered an optional three-month professional internship in their field.

“The Eisenhower Global Scholars Program is an exciting opportunity to extend the legacy of President Dwight Eisenhower, one of America’s greatest military leaders and statesmen, to a new generation of Americans,” Gates said. “These impressive young people will take their place in a dynamic global network of influential leaders intent on making a positive impact in the world.”