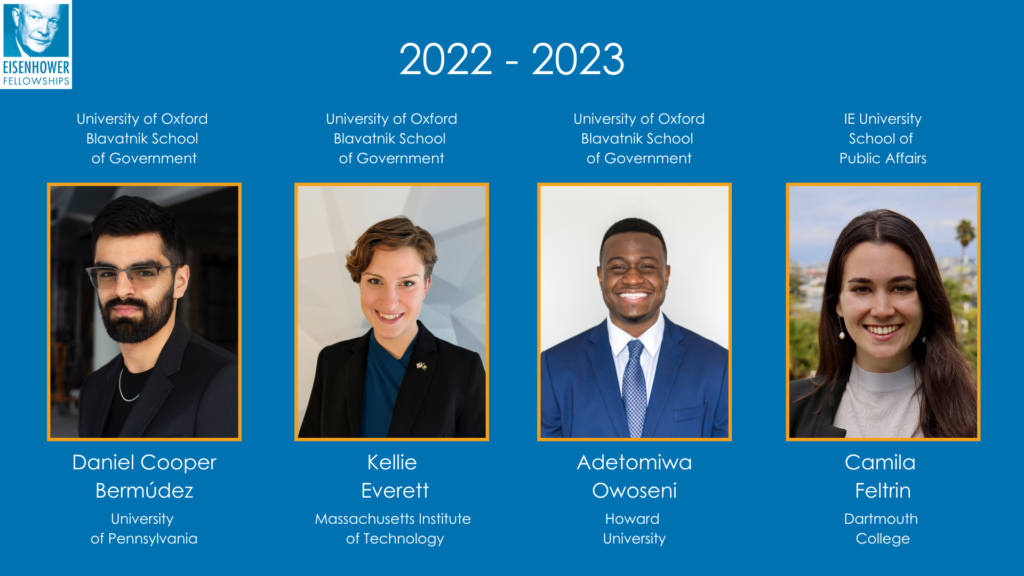 Eisenhower Fellowships today announced its third class of Eisenhower Global Scholars, four outstanding recent American university graduates it will send abroad for a year of postgraduate study at the University of Oxford and IE University in Madrid leading to a master’s degree and immersion in the influential EF global network of Fellows.

The 2023 class of Eisenhower Global Scholars brings together a U.S. Navy veteran of a nuclear-powered warship, a medical researcher promoting health equity in sub-Saharan Africa, a San Francisco-based specialist in immigrant integration and a human rights activist working to expand the reach of civil society in Venezuela.

Now in its third year, the unique Eisenhower Global Scholars Program harnesses the power and prestige of EF’s diverse, worldwide Fellows’ network of more than 1,500 dynamic doers to inspire, empower and encompass the Scholars as it extends the legacy of President Dwight D. Eisenhower to a new generation of young Americans.

Named to the 2023 class of Global Scholars attending the Blavatnick School of Government at Oxford are:

Adetomiwa Owoseni, 25, a graduate of Howard University, currently enrolled at Harvard Medical School. While traveling in Africa, Owoseni saw how unequal access to health care led to negative outcomes for patients, including higher rates of maternal mortality and lack of access to life-saving vaccines. As a researcher with the Noncommunicable Diseases and Injuries Poverty Network, he helped build sustainable systems for the treatment of Type 1 diabetes mellitus, rheumatic heart disease and sickle-cell anemia. At Oxford he wants to expand on that work and create training videos for a free, online platform to educate clinical providers in the most effective treatments of common diseases.

Daniel Cooper Bermúdez, 28, a 2015 graduate of the University of Pennsylvania, is a human rights defender from Maracaibo, Venezuela. With Venezuela’s authoritarian government having closed the nation’s democratic means of political participation, Cooper Bermúdez works to support other civil society organizations and document human rights violations, bring attention to the nation’s humanitarian crisis and seek justice for victims. He is founder and director of Hearts on Venezuela, a nongovernmental organization that seeks to expand the reach of Venezuela’s civil society internationally by translating and distributing texts produced by other organizations seeking a peaceful and democratic resolution to the country’s political turmoil. Under continuous harassment by the government, Cooper Bermúdez and his fellow Venezuelan human rights activists remain undaunted. “We strive to persevere in a context of violence,” he said. At Oxford, Cooper Bermúdez intends to build and strengthen networks of activists and policymakers from across the global South to tackle common issues ranging from human rights abuses to climate change to what he describes as “renovating democratic practices for the 21st century.”

Kellie Everett, 30, a graduate of the Massachusetts Institute of Technology. Everett served six years in the U.S. Navy as a nuclear reactor operator, generating power for the 1,100-foot supercarrier U.S.S. George H. W. Bush at its home port in Virginia and on deployment in the Persian Gulf. Having struggled in her transition from military service to academia, she started a group chat for student veterans, which spurred MIT to create its first Office of Student Veterans Success, a clearinghouse for information about childcare, veteran-specific mental health support and other services. At Oxford she wants to study government systems and learn how the United Kingdom reduced its reliance on fossil fuels. Her ambition is to become a U.S. Senator, serving constituents as “a servant-leader.”

At IE University, Camila Feltrin, 24, a graduate of Dartmouth College, will attend the School of Global and Public Affairs. Feltrin oversees paralegals and interpreters at her law firm in San Francisco, where she organizes filings for asylum cases. Born in Argentina, raised in California, she is fluent in Spanish, English, Italian and Portuguese. At IE University she wants to develop a multilingual online platform with links to U.S. and Italian immigration resources as a toolkit for newly arrived immigrants. Her long-term goal is a position doing “valuable, humanitarian work” at a multilateral body such as the Inter-American Commission on Human Rights or the International Court of Justice.

In addition to their year of postgraduate study, the Global Scholars will interact with EF’s worldwide network of leaders from government, business, civil society, education, science, health care, the arts and journalism. At the end of their studies, they will be offered an optional three-month professional internship in their field.

The Chairman of Eisenhower Fellowships, former U.S. Secretary of Defense Robert M. Gates, welcomed the newest Global Scholars. “We are delighted to select these four outstanding young Americans for this important program that will allow them to expand their horizons beyond our shores and immerse themselves in our global network of leaders,” he said.

Eisenhower Fellowships President George de Lama said the four Global Scholars exemplify the organization’s mission of connecting ascendant leaders intent on creating a better world. “We are proud to proud to provide these exceptional young Americans with the opportunity to deepen their education, elevate their vision and engage with other like-minded leaders to generate a positive impact in their societies,” de Lama said.

Now in its 69th year and named for America’s 34th president, Eisenhower Fellowships brings together innovative leaders from all fields from around the globe to tackle big challenges to better the world around them. Since its founding in 1953, more than 2,500 mid-career leaders from 115 countries have benefited from the unique, customized experience of an Eisenhower Fellowship.

Learn more and meet the Scholars