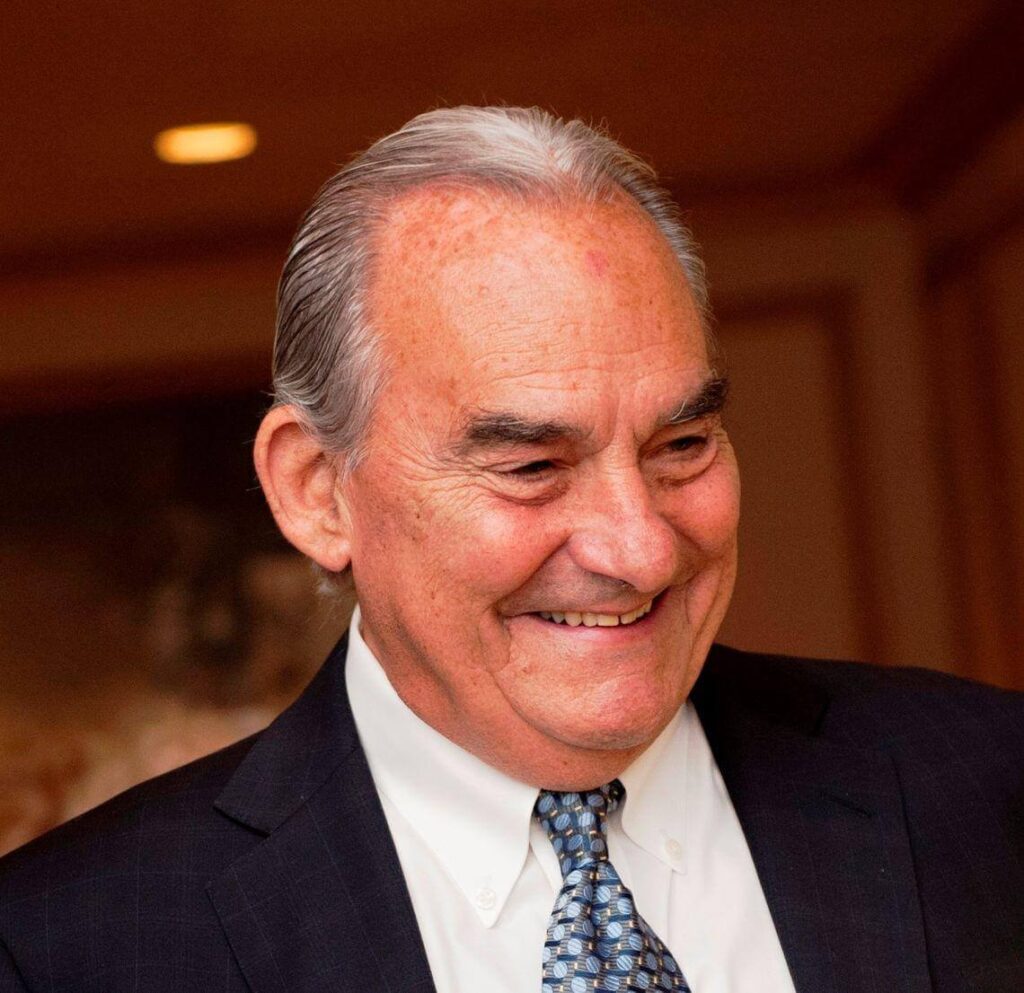 Longtime Eisenhower Fellowships Trustee Harold “Hap” Wagner lost his battle with cancer and passed away peacefully in the San Francisco Bay area on July 26, surrounded by his loving family.

A brilliant engineer and star collegiate athlete who became a nationally prominent business executive and dedicated philanthropist, Hap was one of Eisenhower Fellowships’ most engaged and generous Trustees. He served on the EF Board for more than two decades, a passion that occupied much of his time and attention after his retirement from Air Products and Chemicals, Inc. where he served as Chairman and Chief Executive Officer from 1992 to 2000.

After graduating from Stanford with a degree in mechanical engineering and earning his MBA at the Harvard Business School, Hap gained a rich appreciation for the importance of international affairs when he served in the U.S. Air Force as an officer in the Strategic Air Command and later worked his way up the ranks of Air Products in a 37-year career that took him to various positions across the United States, the United Kingdom and Belgium, where he was president of Air Products Europe before ascending to the board.

At Eisenhower Fellowships, Hap was a longtime member of the Executive Committee of the Board, serving for years as Chair of the Development Committee and generously contributing to EF’s annual operations and the organization’s endowment. He also served as Chair of the new San Francisco hub for EF’s USA Program, an initiative he championed and did more than anyone to bring to reality. Earlier this year EF announced the establishment of the Hap and Marcia Wagner Eisenhower Fellowship for a Fellow from the Bay Area each year in perpetuity, in honor of their great generosity to the organization over the years.

In addition to his engagement with EF, where he regularly attended all Executive Committee meetings in Philadelphia and Miami as well as hosted an extravaganza fundraising dinner each spring and fall at the spectacular St. Francis Yacht Club overlooking the Bay and the Golden Gate Bridge, Hap served on a wide variety of corporate, university and charity boards over the years and with his brother Ron faithfully funded Stanford scholarships for athletes from disadvantaged backgrounds and other students in need.

Hap served for years on the boards of Cigna, PACCAR and United Technologies Corporation, including as UTC’s Presiding Director. He was Non-Executive Chairman and Director of Agere Systems Inc. and Chairman of the board of Dorothy Rider Pool Healthcare Trust. He was a Director of Arsenal Digital Solutions Inc. and of Maersk Inc. He served on the Business Advisory Council of A.P. Moller Inc. and was a longtime member of the Business Roundtable and KidsPeace@National Council for Kids. In addition to his giving at Standord, Hap was a Trustee at Lehigh University and he and Marcia endow a scholarship at Northhampton Community College in Bethlehem, Pa. and were members of the United Way’s Alexis de Tocqueville Society.

Hap grew up a star multi-sports athlete in his native Oakland, Calif., playing high school baseball against the likes of future Major League stars Vada Pinson and Hall of Famer Frank Robinson, and competing in basketball against future NBA Hall of Fame legend Bill Russell. Hap and Russell would play against each other again in college, Russell leading a two-time NCAA Championship team at University of San Francisco and Hap as a starting guard and team captain at Stanford University, where his brother Ron was also on the team and his contemporaries in Palo Alto included EF Trustee Chuck Cobb, himself a collegiate national track star.

A steadfast and stalwart supporter of our Fellows and their work around the world, Hap Wagner played an instrumental role in the continuous evolution of this distinguished organization. He was an exceedingly decent man and a warm and compassionate colleague, and many of us will be eternally grateful for his thoughtful guidance, his even-keeled manner and his great sense of fun.

Tributes flowed into EF headquarters in Philadelphia after news of his death filtered out to our global network of Fellows and supporters. “He was a wonderful man and I feel lucky to have known him,” said former New Jersey Governor Christine Todd Whitman, Vice Chair of the Eisenhower Fellowships Board of Trustees.

The entire Eisenhower Fellowships global family extends its profound condolences to Marcia and the Wagner family. Our thoughts and prayers are with Hap, and with them, at this difficult time. Plans for a memorial service in the coming weeks are pending.