INSIDE INDIA’S FIGHT AGAINST COVID 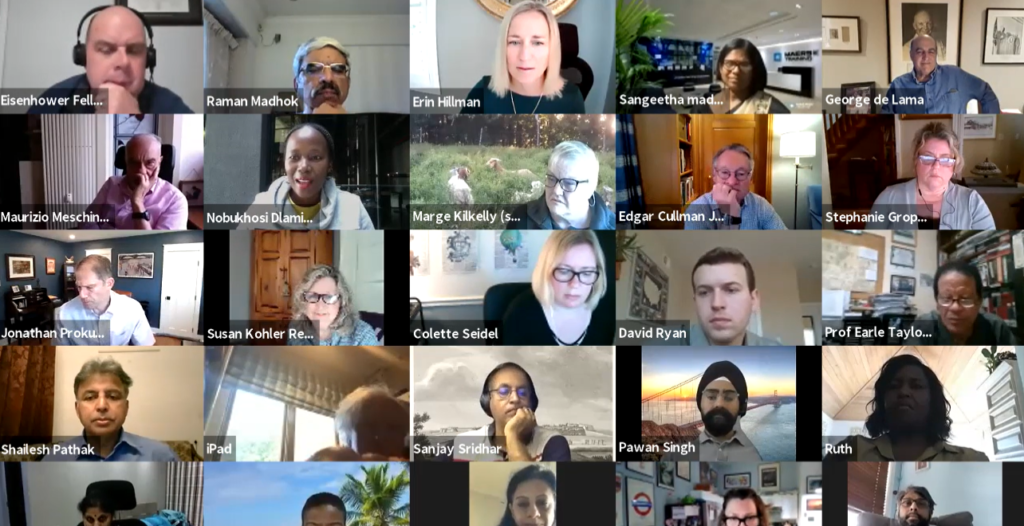 Eisenhower Fellows on the front lines

Locked down in the home that had become her prison in New Delhi, Vidyavathi Vaidyanathan (India 2015) recovered in isolation when the COVID pandemic stalking her land infected her with the virus.

She watched with increasing desperation as nine close family members came down with COVID, one by one, unable to access hospital rooms, oxygen and other medical treatment.

So Vidya turned her apartment into a makeshift medical clinic to provide treatment to loved ones who otherwise would go without. She speaks with eloquent passion about the enormous price in anguish and suffering the pandemic is visiting on her nation.

“More than just the physical part, this has taken a huge toll mentally and emotionally on many of us,” Vidya said. “One part is this feeling of helplessness…And more than helplessness, we’re completely (overcome) with feelings of guilt. There have been cases where colleagues have been saying, ‘Madam, we need a hospital right now. And there is no hospital. (So) we have lost people. I have just lost people.”

Like many Eisenhower Fellows in India, Vidya is working each day to turn her torment and grief into action, determined to aid in the battle against the deadly virus that has made India the global epicenter of the COVID pandemic. The number of cases has been declining in recent days and India is starting to open up slowly. But the experience has been searing.

“This is a particularly challenging time for the country…the hardest I’ve seen in terms of the human toll and suffering that COVID has brought,” said EF Trustee Pavinder “Pawan” Singh, Managing Partner of Bain Capital Private Equity. “And it’s hit close to home for pretty much everyone. Everyone knows either family members who had it, or people close to them.”

The fight of their lives

Across India, Eisenhower Fellows for many months set aside their normal daily concerns to care for their compatriots and charge headlong into the fight against COVID. From the most remote rural areas to the nation’s teeming urban centers, Fellows have been on the front lines of this fight. For many, it is the fight of their lives. 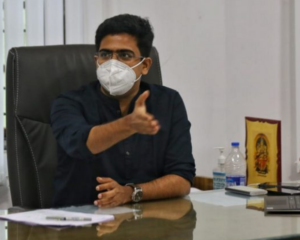 In Tirunelveli, near the southern tip of India, Fellow Vishnu Venugopal (India 2019), District Collector for the Indian Administrative Service, has been working 18-hour days to conserve and distribute the precious small supply of oxygen in rationed doses to the COVID patients who most desperately need it. Vishnu uses all the skills he has acquired through an extraordinary career that included working as a risk analyst for the insurance giant AON in Chicago to optimize the oxygen supply, organize the pooling of oxygen-equipped beds and save lives.

He notes ruefully that sometimes India’s bureaucracy can be like a “black box.” But Vishal has navigated it so skillfully in maximizing the scarce oxygen supply and minimizing waste of the life-giving element that his district has the lowest per capita oxygen consumption in the state of Tamil Nadu, even though it has a high COVID caseload. In gratitude for his work, local villagers have named a hamlet after Vishal.

In the neighboring state of Karnataka, Dr. Krithi K. Karanth (India 2020), Chief Conservation Scientist and Director at the Centre for Wildlife Studies, joined forces with teams of conservation, research and educational professionals to coordinate support for primary health centers in remote rural areas.

In Mumbai, Eisenhower Fellow Raman Madhok (India 2004), the recently retired Managing Director of CMI FPE and head of South Asia for CMI Group of Belgium, spent three weeks locked down in quarantine in his apartment when he and three other family members, including his 2-year-old grandson, were infected with Covid.

Raman, the former head of the India chapter of Eisenhower Fellows, stayed in continuous phone contact with fellow Eisenhower Fellow Vidya to keep tabs on her in New Delhi, where she was stricken by the virus at the same time.

No sooner had Raman and his family recovered than he sprang into action in his role as a Board member and independent Director of United Way Mumbai to partner with global donors in providing COVID patients with food, skills training and jobs and coordinating the acquisition of oxygen and other needed supplies.

In a fast-developing nation that has brought nearly 300 million people out of poverty but still faces great economic inequities, Raman noted the one unifying characteristic of the pandemic: The virus stalks everyone.

“It’s forgotten today who’s rich, who’s ultra-rich and who’s poor,” he said. “The kind of stories which we hear and the kinds of problems which we have seen have been faced by people right across (all) strata of society. That means we are all actually equal.”

Driving aid to the most needy

Nearby, Shridhar Venkat (India 2014) redirected his Akshaya Patra Foundation, already feeding some 1.8 million hungry schoolchildren each day, to a new mission. Surrounded by job losses, hunger and disease, Shridhar pivoted priorities to provide desperately needed food and supplies to COVID patients around the country. “We quickly diverted our strategy from ‘Food for Education’ to ‘Food for Relief,’” he told an interviewer.

Fellow Sanjay Sridhar (India 2018), an architect and urban planner, joined forces with other committed Indian leaders in Bangalore and elsewhere around the country to coordinate engagement with the government with data to identify COVID hot spots. Using technology and mapping to provide guidance on vital logistics, they advise the government in fundraising and the procurement and delivery of health supplies to the areas where they are most desperately needed.

“The tragic side of the second wave is that it has now hit rural India where the sheer lack of healthcare infrastructure basically means that the folks there are sitting ducks to the virus,” Sanjay wrote to his EF colleagues last month.

A diaspora in despair

The head of the EF India chapter, Rajshree Pathy (India 2000), Chairperson and Managing Director of Rajshree Sugars and Chemicals Ltd., found herself in the United States when the pandemic deepened, unable to return home. From her temporary exile, she has stayed in constant touch with Fellows and colleagues back home.

Three of Rajshree’s work colleagues have died from the virus. So has the healthy 31-year-old son of a dear friend, and most recently, her 42-year-old niece. Rajshree voiced the despair and distress felt by untold scores of millions in the global Indian diaspora, anxious to assist from afar at this time of suffering in their nation. “Every morning the day starts with calls for help,” she said.

Rajshree’s family trust owns and operates two non-profit hospitals in her home city of Coimbatore in Tamil Nadu state. Both were overflowing with COVID patients. One ran out of oxygen and remdesivir. Ventilators were in short supply.  Yet still they have pressed on.

In addition, Rajshree also is donating a new 30-bed oxygen-generation facility at a government hospital in the village of Villupuram in rural Tamil Nadu. Still, despite reports of diminishing cases, every morning she is afraid to check her messages because constantly there is new word of friends and loved ones who have died. “It’s been very depressing, to say the least,” she said. “We don’t know when this is going to be over.”

At EF headquarters in Philadelphia, Director of Global Network Programs Patrick Fischer organized a special EF Family Chat on the COVID situation in India in May, bringing together Fellows from across Asia, Africa, the Caribbean and the U.S. to hear their Indian colleagues share their stories and exchange ideas on ways to help.

From his offices in Philadelphia, Eisenhower Fellow Neil Tanner, General Counsel for International Markets at Cigna (USA 2013) has followed the news from India closely. Neil long has had a special interest in India as a result of his work with the U.S. India Business Council and his connections in the EF global network. Neil galvanized support within Cigna for the anti-COVID fight in India, organizing a campaign to connect Fellows in India with Cigna colleagues and with other potential donors in the United States.

In Mumbai, Sunil Mehta, Chairman of Yes Bank Ltd and a Board member and past Chair of United Way India and United Way Mumbai, was among those who promptly responded to Neil’s appeal for help. Sunil enlisted influential friends, including both the current Chairman and the CEO of United Way India, to connect with Eisenhower Fellows across the country to assist in this nationwide effort.

Meanwhile, back in Bangalore, haunted by the lonely COVID death of an old friend with whom he had lost touch, Vishal recently launched a petition drive asking the Indian government to commit to recording every life lost since January 2020 and to establish a memorial in tribute and remembrance of those who perished.

“This petition is important to me because I don’t want this person to become an invisible statistic,” he said of his late friend. Vishal hopes a national COVID memorial becomes “a space for acceptance, acknowledgement, remembrance, healing and closure…A space that reminds us that we as a society failed, and will hold us to account so that we never fail again. We make a commitment to do better, to be better, as individuals, families, communities and as a nation.”

The petition is circulating among Eisenhower Fellows in India, who have taken it upon themselves to serve as a mutual support group for each other. Now they welcome the embrace of Fellows from across the EF global family.

“It’s good to feel part of a family, part of the Eisenhower Fellowships family,” said Fellow Shailesh Pathek (India 2000), CO of L & T Infrastructure Development Projects Ltd. in Delhi. “We were agonizing when the U.S. was going through the worst of the COVID (crisis). It’s heartening to know we are in your thoughts when we are going through our tough times.”

A partial list of charities and other organizations working with Eisenhower Fellows in assisting urgent COVID relief efforts in India is here: