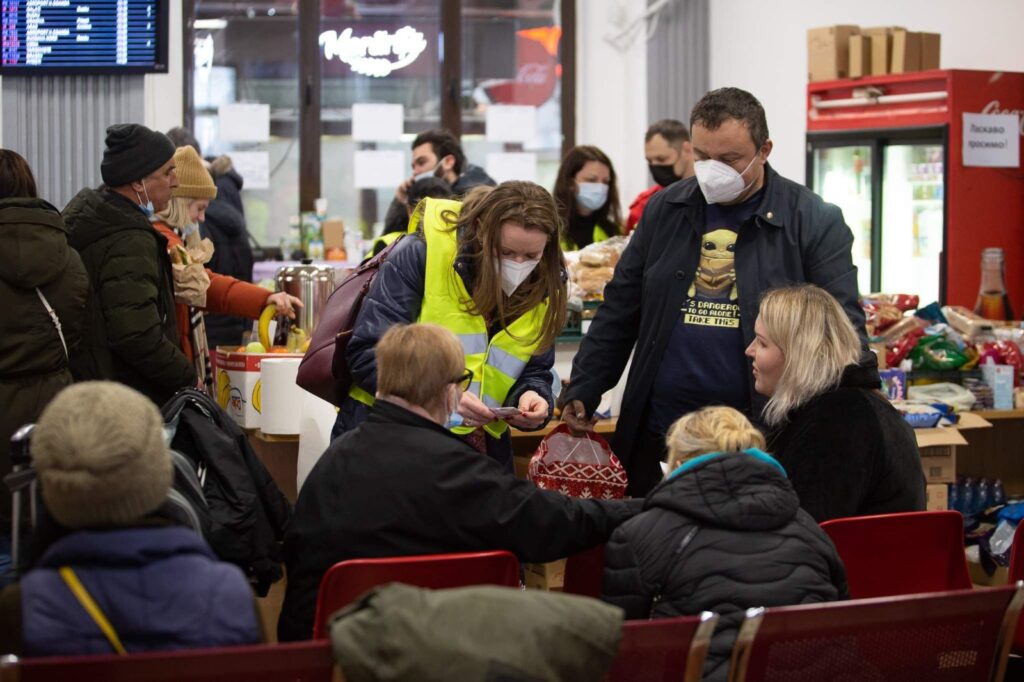 When Laura Stefan heard the news that Russia had brutally invaded its Slavic neighbor Ukraine, she dropped everything to organize help for the traumatized refugees trying to flee the fighting and reach safe haven in Romania.

Like her fellow Romanian Eisenhower Fellows, Stefan has provided housing, food, badly needed medicine and other vital supplies for the multitudes fleeing Russian bombardment for the millions stuck behind inside Ukraine. She notes there is a desperate need for body bags.

Vlad Voiculescu, Romania’s former minister of health, mobilized his nonprofit organization and its more than 100 volunteer drivers to save as many Ukrainians as possible. Voiculescu’s drivers, known as “soul drivers,” have been working around the clock to transport fleeing children and their mothers from the Ukrainian border to their so-called MagicHOMEs, houses that in peacetime they would offer to sick children and their families in Romania.

Similarly, Mihai Toader Pasti, an Eisenhower Youth Leader from 2017, drove seven hours from Bucharest on the first day of the war to Siret, on Romania’s border with Ukraine, to help the terrified refugees seeking refuge in his country. In the first 13 days of the war, Pasti’s team provided shelter and food to more than 3,000 people and helped more than 10,000 people find safe transport into Romania and other countries.

In Bucharest, the capital, Catalin Tenita, a member of the Romanian House of Deputies, directed his nonprofit organization, Geeks 4 Democracy, to aid in the Ukrainian refugee crisis, engaging in border relief efforts and organizing popular protests against Russian actions in Ukraine.

Tenita introduced a bill to strengthen volunteering in the field by creating a partnership mechanism between NGOs and local authorities and NGOs and large employers. He’s now working on legislative changes to protect refugee women and children from human trafficking, a scourge in that part of the world.

More than four million Ukrainians are estimated to have fled their country in the first few weeks of the conflict and several hundred thousand of them have poured into Romania, one of the newest NATO nations bordering the front lines of Europe’s largest ground war since World War II. Most have moved on to other points in Europe where they have family or friends or places where they can stay. But so far nearly 100,000 have remained in Romania, with nowhere to go.

“Most of them are mothers with children,” says Tenita, a Fellow in the 2021 Global Program. “Young women who a few weeks ago were confident about their future. On their faces you can see their tenacity and enormous fighting spirit. And love. You understand how hard they work to tell their children that all is well, that nothing is lost, that they will all return to their homes and fathers.”

Stefan, a Fellow in the 2015 Women’s Leadership Program, said the war has changed the people of their region forever as they’ve watched Ukrainian women try to get their children out the country, leaving their men—their husbands, brothers and sons–behind to fight.

“They travel together with their kids by foot, train or car and on the way, they are bombed by the Russians,” says Stefan, a former director in the Romanian Ministry of Justice and executive director of Executive Forum, a nonprofit combating corruption and promoting good governance and civic participation. “We dropped everything we were doing and started organizing help for refugees here and networks to take essential supplies over the border to Ukraine, from where they were picked up by our local partners and delivered to cities were fighting is taking place and where there are people in need.”

With Ukraine’s war lapping up against their border, Romanian Eisenhower Fellows have opened their arms and their homes to their devastated neighbors. Like other Fellows in her country and countless Romanians, Stefan personally has taken in homeless Ukrainian refugees. She has three families living in her country house and many more are living in apartments in Bucharest volunteered by her friends.

Similarly, Voiculescu, a Fellow in the 2018 Global Program, is focused on helping transport people from the border to larger cities where more resources are available, and his NGO is housing more than 600 women and children in five cities as well as in the summer camp his organization runs.

“We’re full and it’s getting harder each day to find spots for everyone who needs it,” he says. “Mostly mothers and children—five of them with cancer. They’ve sometimes traveled five days, by car or by foot. It’s heartbreaking….

“The mobilization of Romanians is overwhelming – I can hardly think of people I know who have not lent a hand already – offering the donations, their time or sometime rooms in their homes and apartments to host mothers and children who just lost everything.”

Beyond the immediate need to house and feed people, he notes that Western European countries will soon need to address the challenge of where these refugees want to go since most do not want to stay in Romania.

Voiculescu, Stefan and Tenita agree that the composition of the refugee population poses specific challenges. Because most refugees are women and children, childcare is essential but unavailable, preventing most Ukrainian women from working. The language barrier is another challenge, given that few Romanians speak Russian or Ukrainian and most Ukrainians don’t speak English.

All the Romanian Fellows are trying to adapt on the fly, and everyone contributes in their own way. Dan Manolescu, a Fellow in the 2016 Global Program and Romania’s former deputy finance minister, now heads the Romanian Tax Consultant Chamber. He helped successfully identify, promote and obtain legislative approval for a wide set of measures to speed up the employment process for newly arrived Ukrainians and to facilitate new tax rules for financial donations and other kinds of aid Romanian companies are providing the refugees.

Tenita’s nonprofit is operating a call center that has received thousands of calls from refugees seeking information about healthcare, housing and border crossings. He is working to organize an exhibition of war photos at the Romanian Parliament in Bucharest to raise awareness of the cruelties being inflicted in Ukraine.

Beyond Romania, Eisenhower Fellows across the EF global network have been moved to help. On March 24, Argentine Fellows held a Zoom call with Stefan, Tenita and Voiculescu to discuss the war in Ukraine and the refugee crisis in Romania. Fellows from six decades participated in the call, ranging from the 1970s to the 2020s.

The Argentine Fellows extended their deep solidarity and asked what they could do to help. The Romanian Fellows were gratified and touched by their support and encouragement. That collaboration within the EF network will continue and almost certainly will expand.

“(They) say that to raise a child takes an entire state,” Tenita notes. “Sometimes, right now, for the refugee children of Ukraine it takes (all of) humanity.”

If you want to help the effort to aid Ukrainian refugees in Romania, here are some links to organizations advancing that work: