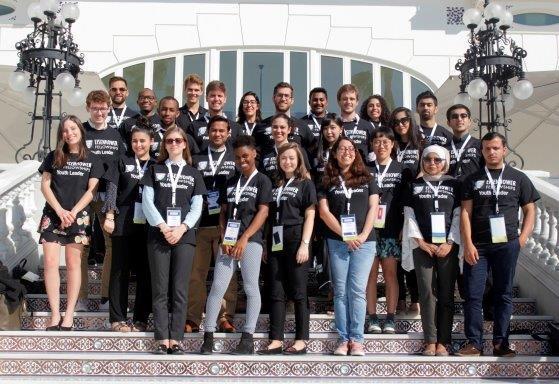 Narcissistic? Lazy? Maybe not. Generation Y is demonstrating it has the same stamina as previous generations to act towards a positive impact in their communities and the world. Meet the Youth Leaders that can lead the way.

Yes, Malala Yousafzai may have the spotlight right now -and the Pakistani activist born in 1997 certainly deserves it- but there’s more to youth leadership all around the world. While specialists are still debating their features, millennials decided to take a step forward and some of them are proving they have the potential and the strength to make a positive impact on society and the environment. Bearing this in mind, Eisenhower Fellowships has launched a network of 32 students and professionals aged 18 to 25 from all around the world.

This is the first youth network for Eisenhower Fellowships and the initiative is progressing at a good pace; the members of the group started their real work after the first meeting at the Future of Work conference in Malaga, back in September 2017. Each one of the 32 leaders has a project they will be working on throughout this year and a plan to impact their communities -and maybe their countries, who knows.

Then the question is: why them? Sure, it is a group that has accomplished a lot while some of its members have just finished high school, but the word “motivation” helps understand the selection better. Alberto Niego is a youth leader from Peru and the co-chair of the Youth Leadership Network, and he has some views on the selection criteria. “Every person has incredible potential to do good in this world. Some people do not realize that. Some others do, but decide not to bother with the responsibilities of creating a positive impact. Then there are those who are aware of their power and their responsibility thereof. I think that when we talk about Eisenhower Youth Leaders we refer to the latter group,” he states.

Members of Generation Y have a special characteristic: their digital mindset. Born between 1980 and 2000, the men and women of this generation are “futured focused by definition”, as Ben Butler, one of the youth leaders from Ireland, describes them. With social media on their side, the possibility of the contagion effect is huge. Still, Israa Al Bargoothy, a representative from Jordan, believes that even though anyone can be an inspiration for the good, not everyone can be a leader: “Leadership needs people who commit to their own project, who are open-minded and ready to interact with different people from around the world,” she expresses.

As regards this, a survey conducted between the members of the group showed that the terms “diversity” and “change” are the ones that the leaders think represents the network best. Not all experiences around the world are the same. However, the results of a survey by Deloitte demonstrate that, at least in United States, millennials have transformed the term “diversity” from focusing on religion and demographics to unique experiences and to thoughts and ideas rather than to people. This group seems to use these concepts as well: the ongoing dialogue between cultures is rich and enlightening for all of its members.

Up to this point, it could seem as though youth leaders were heroes, but group members seem to differ. They point out their lack of experience is usually seen as problematic. Niego, from Peru, finds the silver lining to this disadvantage: “It is also an opportunity because it will make us work harder to get the respect, the knowledge and the resources that we need in order to accomplish our goal”. Zayed Mohamed, from Kenya, adds: “Getting exposed to such experiences at a young age means that we have enough time to refocus on our lives and take the route that will lead us to success.”

They are also respectful of their role. Spanish youth leader Tamara Abusara says she sometimes feels the “impostor syndrome” – a difficulty to internalize one’s own accomplishments – but she shakes it off with time to reflect on what she has already accomplished. “This is a syndrome that especially affects millennial women from all around the world. You keep mentioning external factors that got you to where you are. Obviously, time itself has a lot to do, but then there’s the effort you have to put. I enjoy being a youth leader but I feel very responsible with this role.” she adds.

Other members find the representative part challenging. Butler claims that he feels “a bit of a burden representing young people” because he’s had his “own particular experience and upbringing” that isn’t necessarily representative of everyone. Mohamed states that he fears “not being fair” to his community and to the group, and to avoid that, he says, he chose to stay “open-minded and progressive” so as to listen to as many people as he can.

In other words, the members of Eisenhower Youth Leadership Network know they have to make an impact and they want to do it correctly. That is where EF mentors have such influence: dialogue combining experience from both sides can be rich enough to enhance change in both networks. The key word is reciprocity, and the Youth Leadership Network is fully aware of it.

“Collaboration between the youth leaders and Fellows could be really virtuous because we obviously don’t have as much experience as they do, but we do have an important tool which is the digital mindset.” says Abusara, “and I do not think this should stop as years go by.”

To sum up, Butler shares a thought on whether the “young leader” title is for life: “A bigger question is how we should define youth – is it biological? Is it a mindset? On the biological front, we’re living longer and longer, so the traditional demographic demarcations have to adapt. The Youth Leaders of 2048 might be someone in their thirties, and who knows what age Fellows will have!”. Let’s hope for a future of constant dialogue between both groups, even after those “demographic demarcations” have worn out.