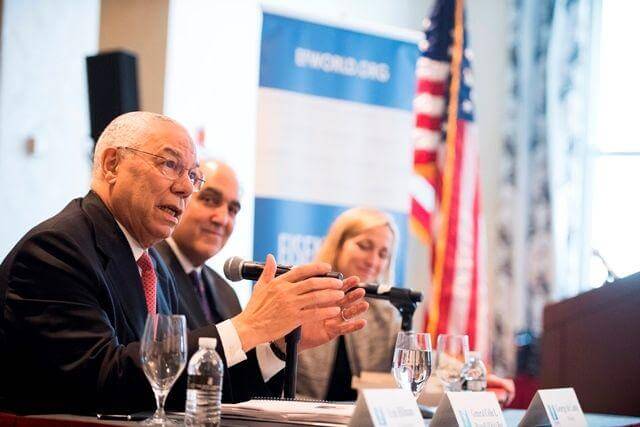 Eisenhower Fellowships’ Closing Seminar 2017 wound up its week in Philadelphia with a new Board Chair, several dynamic panels and a pair of celebratory events that attracted Fellows, Trustees and special guests from around the world.

Here’s an overview of the closing 48 hours:

Before the midweek Pin Night ceremonies, a group of Global, USA and Zhi-Xing Fellows related their stories of fellowship at the Racquet Club of Philadelphia. They included Cordell Carter (USA 2016), Sangeetha Madhu (India 2017), Bernedetta Berti (Israel 2017) and Dan Gallant (USA 2016).

Later that afternoon, at the newly-opened Museum of the American Revolution, serial societal entrepreneur Gideon “Gidi” Grinstein led a discussion on “The Future of Work: Global Challenges and Local Solutions” with a panel of Eisenhower Fellows that featured Frederik Bruhn (Sweden 2017), Jamie Lin (Chinese Taipei 2017), Kathryn Finney (USA 2016) and Nagesh Rao (USA 2016). Bruhn, when discussing the future of space traveled, remarked “I have to go to Mars because it’s there.”

After a cocktail reception and dinner at the museum, EF President George de Lama and James W. Hovey, Chair of the Executive Committee of the Board of Trustees, bestowed EF Pins to 45 Fellows representing the Global, USA and Zhi-Xing programs. “Wear your Eisenhower pin proudly as a reminder of this transformational experience,” de Lama said.

Later in the evening at the Annual Awards Dinner hosted by TV personality Cynthia Gouw, de Lama announced to the assembled guests that General Powell will retire as EF Chairman in May 2018. General Powell then announced that he will be succeeded by former Defense Secretary Robert Gates. “We are profoundly grateful to General Powell for his years of service, his leadership and his inspiring example to our Fellows around the world,” de Lama said. “We look forward to working with Secretary Gates to advance the mission of Eisenhower Fellowships, which is more important and relevant than ever in these unsettled times of rising tensions around the globe.” General Powell called Secretary Gates “an exceptional leader of great experience, statesmanship and humanity.”

The Distinguished Leadership and Service Medal was awarded to former New Jersey Gov. Christie Todd Whitman, Vice Chair of the Board of Trustees. General Powell cited Whitman’s advocacy after a video montage dedicated to her was shown in the ballroom. “She’s made her mark, overseeing the extended reach of EF’s fellowship programs, while advocating for more focus on women’s leadership and pushing for more female Fellows each year and for a stronger overall USA fellowship program.”

After the awards presentations, Global Fellow Thanh Bui (Vietnam 2017) played the piano and delivered a stirring vocal performance of “Help”.

Later, after the program was over, guests continued with many conversations while nibbling on desserts outside the ballroom, ending the week of events.