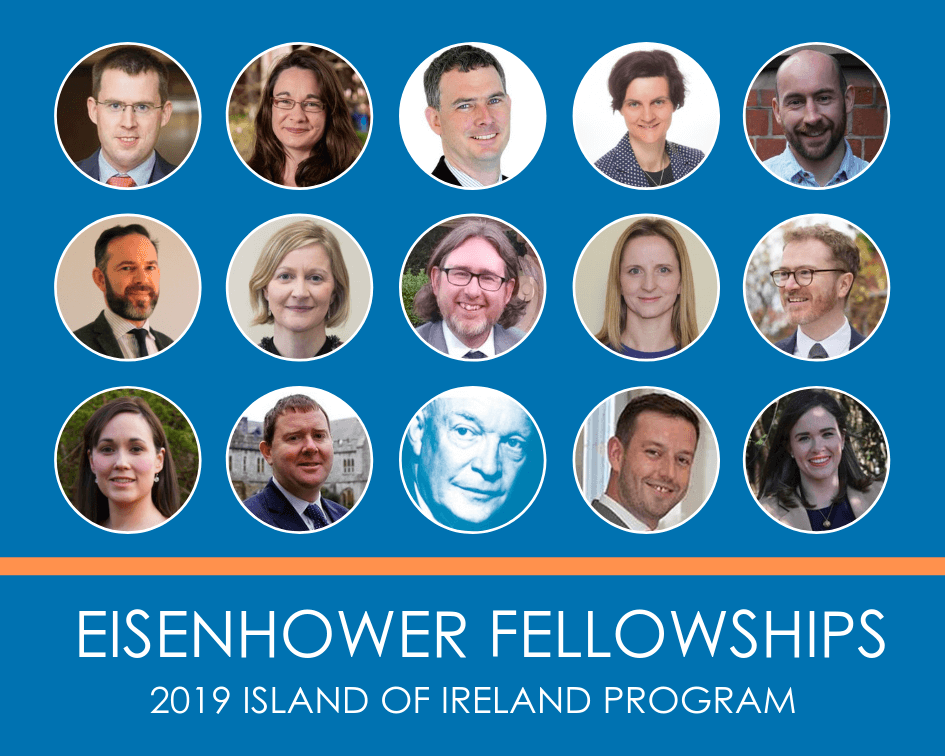 Philadelphia, March 25, 2019 – Eisenhower Fellowships is proud to announce the selection of 14 highly accomplished mid-career leaders to participate in the 2019 Island of Ireland Program, a premier six-week international leadership program that begins May 1.

The recipients, seven from Northern Ireland and seven from the South, work in diplomacy, law enforcement, economics, religious affairs, environmental conservation and academia.

They include the manager of a charity for Syrian refugees, an Irish ambassador to Africa, an adviser to Northern Ireland’s Civil Service, a specialist in public access to government data, a climate change expert and the administrator of an interdenominational group of churches.

These dynamic leaders will travel across the United States on fellowship and engage in transformative exhanges of knowledge and ideas with leading thinkers in their fields. Later they will apply what they learn in concrete projects with a real-world impact when they return home.

The 2019 Island of Ireland Fellows are:

The 2019 Island of Ireland Program marks the 30th anniversary of EF’s 1989 Single-Area Program for Ireland and Northern Ireland that first brought together Fellows from both sides of the Irish border. That program forged relationships of trust that helped support an end to the island’s bloody sectarian conflict. Several Irish Fellows of the original 1989 program subsequently played important roles in negotiating and safeguarding the Good Friday peace accords of 1998.

Tánaiste Simon Coveney, Ireland’s Minister for Foreign Affairs and Trade and its deputy prime minister, welcomed the EF initiative at this crucial time in the history of the island. “The Fellows chosen are outstanding individuals, accomplished in their own fields, and this is a superb opportunity to further develop their personal leadership skills while working together to strengthen the bonds on the island, and between Ireland and the United States,” Coveney said.

The program was equally well received in Northern Ireland, where David Sterling, Head of the Northern Ireland Civil Service, said it provides “unique opportunities for individuals to develop their leadership skills and build connections with others that can only be of benefit to us all in the future.”

The Island of Ireland Program has been supported by funding from the Department of Foreign Affairs and Trade, the Northern Ireland Civil Service, and KPMG Ireland.