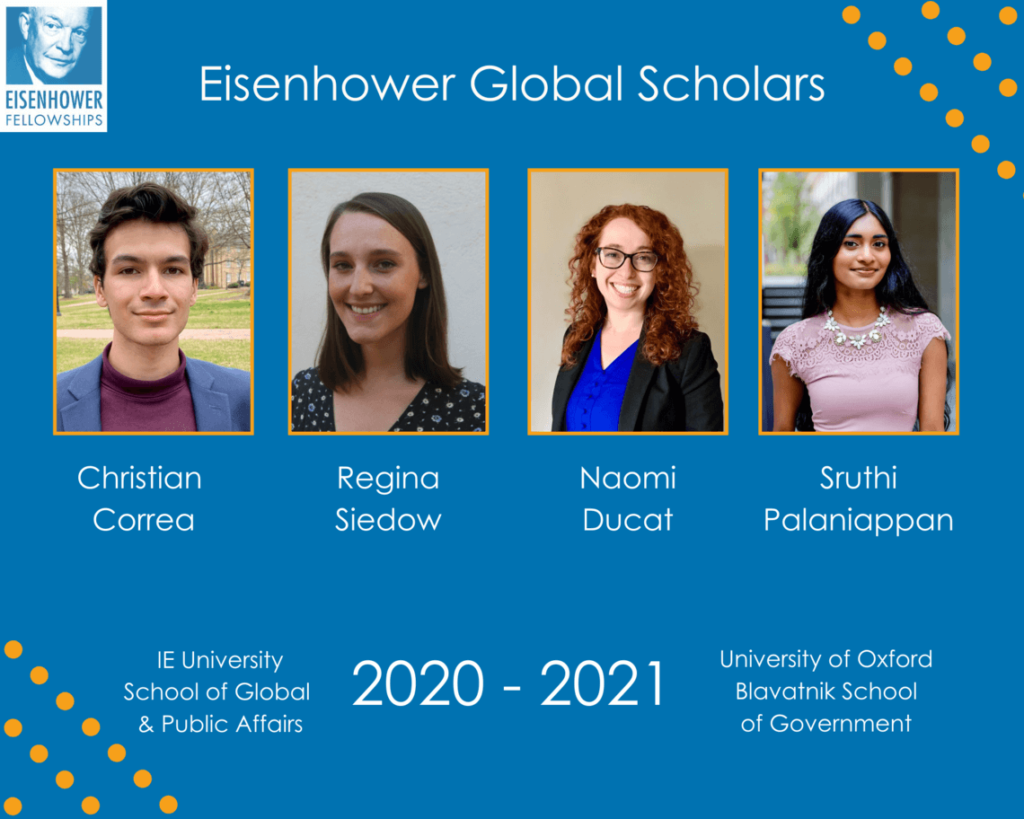 Expanding the reach of its widely acclaimed program that for nearly seven decades has connected midcareer professionals around the world, Eisenhower Fellowships will inspire and empower a new generation of young American leaders with the launch of its inaugural Eisenhower Global Scholars Program this fall.

Four highly accomplished recent graduates of American universities will travel to the United Kingdom and Spain this fall for a year of postgraduate study at the University of Oxford and at IE University in Madrid punctuated by unique exchanges with Eisenhower Fellows in Europe and followed by hands-on work experience back in the United States.

Sruthi Palaniappan, a graduate of Harvard University, and Naomi Ducat, a graduate of Queens College, City University of New York, will spend a year of intense study and cultural immersion in England at the University of Oxford’s Blavatnik School of Government. They will refine their individual project proposals and complete a Master of Public Policy degree with a focus on public service and effective governance.

Palaniappan, 22, a former Harvard Student Body President, led the launch of the university’s online mental-health screening system. During a busy academic career she interned at ABC News, CNN, UNICEF, the Chicago Domestic Violence Legal Clinic, Save the Children and Common Cause. She is a skilled Bollywood dancer, who choreographed four dances at Harvard that encompassed more than 300 participants. After completing her studies at Oxford, she proposes to create a civics curriculum for 5th graders, starting them early on the path to civic engagement as well-informed members of society.

Ducat, 25, is an associate with Booz Allen Hamilton at the U.S. Department of Defense, where her job involves crisis-exercise planning. She was a national security intern at the White House in the office of Vice President Joseph Biden during the Obama administration. Her professional ambition is a career as a policy advisor at a multilateral organization such as the World Bank or the United Nations to advance global consensus on conflict prevention and international human rights. At Oxford she plans to examine the efficacy and enforcement of international commitments to combat human trafficking.

Siedow, 26, a Peace Corps alumnus, served in a 1,200-person village in southeastern Senegal, where she mastered Malinke, the native language. She was elected by her peers to be the lead liaison between senior Peace Corps staff and the 250-member volunteer community. In Senegal she oversaw capacity-building events for community healthcare workers, and the creation of a health club for middle-school students. She conducted home visits for pregnant women and new mothers.

At IE, she wants to create a toolkit for immigrants, refugees and asylum seekers that provides resources on topics such as cultural norms, employment assistance and affordable housing options.

Correa, 21, was vice chair of the Undergraduate Senate at UNC, where he shepherded a resolution that led to the creation in 2018 of the university’s Latinx Center for Hispanic students. He was instrumental in the effort to remove “Silent Sam,” a Confederate monument that had stood on the campus for more than 100 years. At IE, he will focus on the structural inequalities in U.S. healthcare that have contributed to the disproportionately high rates of infection and deaths from the Covid-19 pandemic for African-Americans, Hispanics and other communities of color in the United States.

In addition to their year of academic study, the Eisenhower Global Scholars will have access to EF’s extensive global network of leaders from government, business, civil society, education, science, health care, the arts and journalism. At the end of their year abroad, the Scholars will be offered an optional three-month professional internship in their field.

Eisenhower Fellowships Chairman Robert M. Gates, former U.S. secretary of defense, welcomed the initial cohort of Global Scholars into the Eisenhower fold. “The Global Scholars Program is an exciting new way to expose young American leaders to the rest of the world, and to extend the extraordinary legacy of Dwight D. Eisenhower, one of our greatest presidents and military leaders,” Gates said.

Eisenhower Fellowships President George de Lama said the Global Scholars add a dynamic new youth dimension to EF’s world-class leadership exchange programs. “We are thrilled to partner with Oxford and IE, both great global institutions of higher learning, and introduce these American students to our influential network of exceptional leaders around the world,” de Lama said. “We look forward to their taking their place in the ranks of Eisenhower Fellows who build bridges across borders and cultures.”