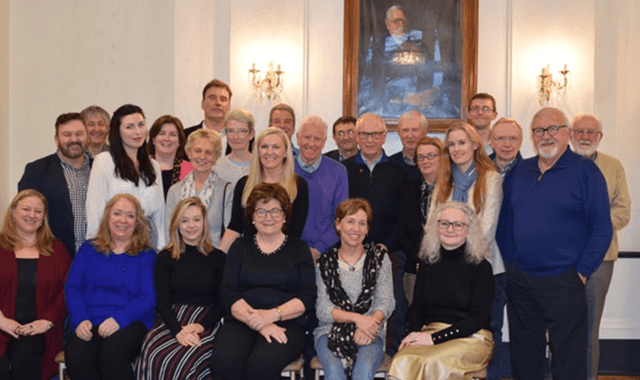 Taking a Page from the Past, Eisenhower Fellowships Revives an Historic Program Binding Leaders from Ireland and Northern Ireland.

Thirty years after an historic Eisenhower Fellowships program stimulated people-to-people contacts that helped support an end to bloody conflict on the island of Ireland, EF will assemble a group of 14 Fellows–seven from Northern Ireland, seven from Ireland—to inaugurate a new program of leadership development for exceptional mid-career professionals on both sides of the border.

For six weeks, starting April 30, Eisenhower Fellowships will host its 2019 Island of Ireland Program: An Initiative for Ireland and Northern Ireland. Fellows from North and South will crisscross the United States, pursuing individual projects and engaging in transformative exchanges of knowledge and ideas with leading thinkers in their respective fields.

At the end of their EF journeys, they will return to Philadelphia to share observations. They will carry back what they have learned to apply it, both individually and collectively, in the service of their communities.

EF’s first program uniting Fellows from both sides of the Irish border in 1989, known officially as the Single-Area Program for Ireland and Northern Ireland, forged unlikely North-South relationships of trust that were important to achieving peace through the Good Friday Agreement of 1998.

Fellows Terry Carlin, Peter MacLachlan and John Dunlop worked to strengthen cross-community conciliation in a divided society. Later, for more than 15 years after the accords, Fellow Tom Frawley served as ombudsman of the Northern Ireland Parliament.

Reanimating that brand of collaboration, with the capacity to contribute to the next stage of peaceful development, is among the goals of the 2019 Island of Ireland program. It comes at a time when Brexit, Britain’s exit from the European Union poses major social, political, economic and border-control challenges for Ireland and Northern Ireland.