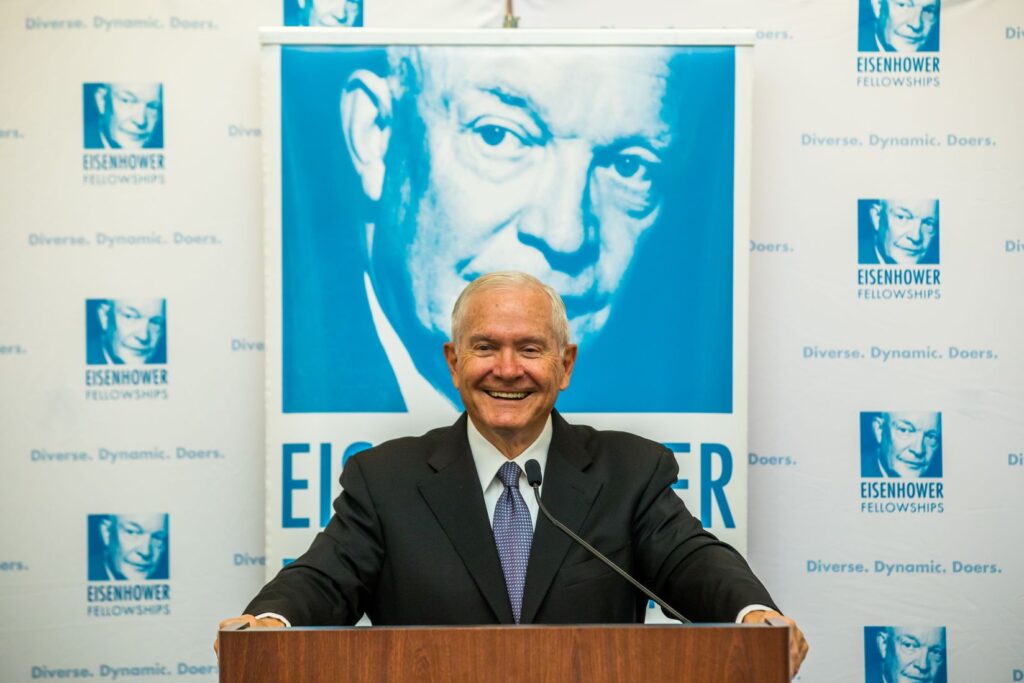 Eisenhower Fellowships is pleased to announce that former Secretary of Defense Robert Gates, who served eight American presidents of both political parties, will become the 9th Chairman of the Board of the nonprofit international leadership organization. He will succeed General Colin L. Powell, USA (Retired) as Chairman in May, 2018.

Secretary Gates served as the top civilian official at the Pentagon for Presidents George W. Bush and Barack Obama, the only Secretary of Defense to be kept on by chief executives of different parties. Earlier he served as Director of Central Intelligence, Deputy National Security Adviser to President George H.W. Bush and in between government posts, as president of Texas A&M University.

“Bob Gates is an exceptional leader of great experience, statesmanship and humanity,” General Powell said. “I’m delighted that Bob has agreed to succeed me in the leadership of Eisenhower Fellowships, a dynamic organization that connects leaders across borders and cultures to enhance international understanding and promote collaboration. Bob will be the perfect leader to help our Fellows work towards President Eisenhower’s vision of a world more peaceful, prosperous and just.”

Founded in 1953 as a tribute to President Dwight Eisenhower, Eisenhower Fellowships is an independent, nonpartisan, nonprofit organization that identifies outstanding midcareer international leaders from all fields and brings them to the United States for individualized fellowships of meetings with top experts across the country, and sends ascendant American leaders overseas to do the same.

Since its inception, Eisenhower Fellowships has sponsored more than 2,400 leaders from more than 100 countries around the world, among them four heads of state, more than 100 who have served at the Cabinet or ministerial level, and hundreds of business leaders, university presidents and heads of major non-governmental organizations.

“It is my honor to be selected as Chairman of Eisenhower Fellowships,” Gates said. “Colin and I have been friends for some 35 years, and I am flattered to succeed him, knowing full well no one can replace him. I look forward to working with the Board, the staff and the extraordinarily talented and diverse network of Eisenhower Fellows around the world.”

“We are profoundly grateful to General Powell for his years of service, his leadership and his inspiring example to our Fellows around the world,” said George de Lama, Eisenhower Fellowships president. “We look forward to working with Secretary Gates to advance the mission of Eisenhower Fellowships, which is more important and relevant than ever in these unsettled times of rising tensions around the globe.”