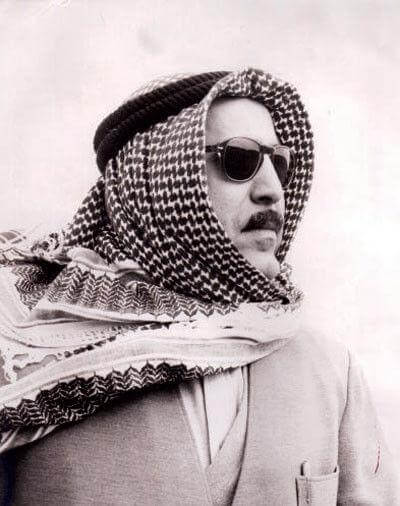 Prior to taking his role as Minister of Agriculture and later establishing the Al-Dabbagh Group, a family conglomerate founded in 1962, Abdullah Al-Dabbagh became the first Eisenhower Fellow from Saudi Arabia in 1960. He was sent on a six-month tour of the USA sponsored by Eisenhower Fellowships (EF). It ended with a meeting with President Eisenhower at the White House. According to His Excellency Sheikh Abdullah, President Eisenhower, “received all the fellows very kindly and warmly and stressed the importance of exchanging visits between the people of all nations in achieving understanding.”

The trip was designed to polish his knowledge of agricultural engineering, and the six months would be spent touring the country and following a “wonderful” program arranged by the United States Department of Agriculture (USDA). His Excellency Sheikh Abdullah Al-Dabbagh and his wife, Azza, were given a brand new 1960 Ford Falcon by the Eisenhower Fellowships organization, and they set off on their trip using a Trip Tik from the American Automobile Association. He wrote “I was not sure I could get along with the Trip Tik in this car, and was afraid of getting upset amidst the highway network. But as I drove along the proper highway for a while I discovered how easy and pleasant it was to drive on such wonderful and clearly marked highways.”

“We travelled 10,270 miles along US highways, freeways and turnpikes. We climbed mountains, went through tunnels, crossed rivers and passed across barren deserts,” he wrote. The journey would take him to centers of excellence in water and agriculture in locations all across America, such as Tennessee, Oklahoma, Texas, New Mexico, Arizona, Nevada, California, Idaho and Montana, and half the trip would be spent in places such as Texas, Arizona and Southern California that had similar habitats to the Kingdom.”

“There is no doubt that the program I had during my stay in this country was extremely interesting and beneficial. I had the opportunity to visit with the top people of the USDA, to visit universities, foundations, laboratories and centers of excellence.” He was grateful for having had the opportunity to learn from what were some for the most advanced projects and initiatives at the time, as well as from the hospitality of his hosts, who were devoted to their professions with great enthusiasm. “The scientists and research people we met kindly gave me many hours of their precious time discussing the work they were conducting and the goals they were aiming at. The sort of people who work calmly and patiently toward the prosperity of this country and the benefit of mankind, people the United States should be proud of.”

As the third Minister of Agriculture in Saudi Arabia and the first Saudi agricultural engineer, His Excellency maintained his public servant’s character even after leaving office. His life was a constant process of finding ways to convert his activities – professional and personal – into outcomes that would benefit the Saudi nation and people at large, and finally those in the world whose lives his activities could touch. He was, simply stated, a humanitarian.

His Excellency was a humble person and this journey played a large role in shaping that in him and in taking the Al-Dabbagh Group from a local start-up on the Red Sea, to a conglomerate whose corporate and philanthropic activities reach and touch the lives of millions of people worldwide.