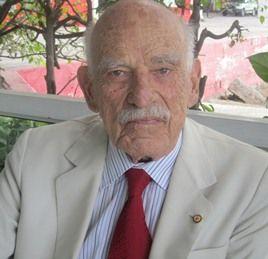 It’s with deep sorrow that we report Eisenhower Fellow Antônio Dias Leite Jr. (Brazil 1960) passed away earlier this month at age 97 in his home country. He died of complications from a fall he suffered two weeks prior, but until then he had been healthy and lucid, family members told a Brazilian newspaper.

Leite was an active participant with EF in the past several years, attending an EF Conference in New York, a Fellows gathering in Rio in 2013 and submitting his EF story for publication in the 60th anniversary book.

Leite, the son of Portugese immigrants, was born in 1920 in Rio de Janeiro and studied engineering at the Federal University of Rio de Janeiro. He graduated in 1941.

He was selected in 1960 to be part of the Eisenhower Fellowships and studied the U.S. economy. “This international experience was a milestone: it gave him a new vision of energy, technology and economic development,” said Paula Leite Dias, his granddaughter. “He brought this knowledge to Brazil and began sharing his experience in articles. From there, he, who was already a respected scholar, began to gain more visibility as a public person.”

Leite was named the country’s Minister of Mines and Energy from 1969 to 1974, under President Emilio Medici. Previously, he was president of Brazil’s largest mining company, Vale SA, and Undersecretary for Economic Affairs. He was also Director of the Faculty of Economic Administration at the Federal University of Rio de Janeiro where he was later named Professor Emeritus.

He played an essential role in restructuring the electricity and mining sectors as well as helped advance geological and technological research. Leite played a crucial role in the establishment of the bilateral treaty between Brazil and Paraguay that resulted in the construction of the Itaipu hydroelectric plant in the 1970s.

Leite remained engaged until his recent accident and, underscoring this assessment, his 19th book will be released in May, titled “My Century – Brazil In Which I Lived”.

He and his wife Manira were married for 69 years until her death three-and-a-half years ago. Their survivors include five children, 12 grandchildren and 17 great-grandchildren. A Seventh Day Mass will be held 6 p.m. May 18th at the PUC Church in Gavea, in southern Rio de Janeiro.